A loudspeaker system that adds nothing, leaves out nothing - so only the music remains.

Martijn Mensink who's responsible for the acoustic design of Dutch & Dutch products explains how it works.

The Dutch & Dutch 8c is a loudspeaker that works together with the acoustics of the listening environment.

A cleverly sophisticated acoustic design, supported by DSP is responsible for this.

A new generation of loudspeakers

The 8c is one of the first of a new generation of high end loudspeakers, where not only the performance in a 'dead room', but especially in 'normal' rooms are important. Currently you still see mainly conventional speakers at shows and in professional literature, but I am convinced that the playing field will look very different in a few years. The fact that the acoustics of your listening room have a big influence on the sound is now known to many; systems that deal with the acoustics in a smart way simply sound better. In addition, the 8c is compact, but complete: it offers powerful, full-range sound and all the necessary electronics and amplification is included. We use the wall behind the loudspeakers as a kind of springboard. Unlike loudspeakers that are installed freely in the room, you do not have to deal with a reflection. The loudspeaker and the wall form one system that radiates forward a coherent wave front in the shape of a hemisphere.

A midbox with directional action

The midbox is in a semi-open cardioid housing that behaves more or less as a cardioid directional microphone, but with reverse effect. A loudspeaker diaphragm moves forwards and backwards and makes sound. Simply put, the result, is that approximately the same amount of sound goes into the cabinet as it comes out at the front. In conventional loudspeakers, that energy must all be attenuated so that it can not mix with the desired sound from the front of the membrane.
Instead of dampening it, we make use of that sound that is radiated in the cabinet. Due to the internal construction and the use of acoustic materials, we ensure that the sound coming out of the openings in the sides of the loudspeaker is equal to the sound that bends around the cabinet from the front, but in opposite phase. The sound from the front and the sound coming through the slots meet at the back of the housing, where they extinguish each other. As a result, the central area is blasted forward only and, acoustically speaking, the wall behind the loudspeaker is out of sight. 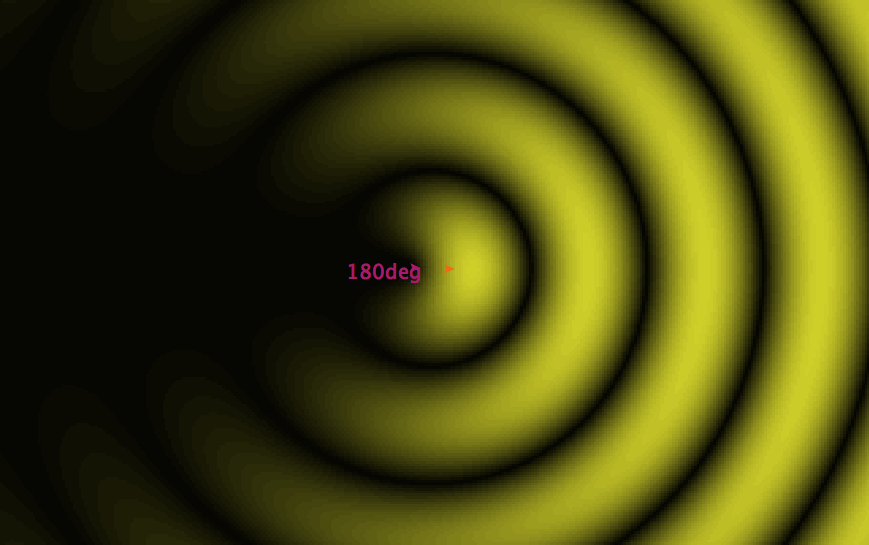 In this picture you can see how a cardioid speaker radiates strongly forward and not or hardly backwards:
It is not easy to design such an open midbox on the basis of theory, because there are many variables that have a great influence on the functioning of the system and some of which are interdependent to varying degrees: it is impossible to make a sufficient accurate calculation model. So, we start with a mathematical approach, but from that basis on we continue with the system that we developed ourselves to optimise the acoustic filtering of the midbox to perfection.
An additional advantage of an open midbox is that cabinet coloring is reduced to an absolute minimum. Together, all these features provide a particularly detailed and spacious sound.

The treble is represented by a dome tweeter with a waveguide. The waveguide is also designed to project a coherent wave forward with a very constant radiation that perfectly matches the cardioid radiation of the mid-toner and without smearing in time as a result of diffraction. We work with a Seas dome tweeter and not with a compression driver, because with a dome we can achieve just a little cleaner and more refined view.
For the geometry of the waveguide, the shape of the rounded baffle edges and the position of the tweeter with respect to baffle edges, we have once again started with the theory, and then further optimise with our own methods. After more than ten subtly different versions we have produced the current design, which is completely smooth from the tweeter to beyond the baffle edge: also mounting screws and seams in the construction lead to disturbances of the sound, however small. We are proud of the result: due to the uniform radiation and the lack of diffraction the 8c sounds incredibly neutral, whether you are right or not.

The DSP does a number of things. First, it acts as a crossover between the subwoofers at the back, the cardioid mid-range and the waveguide tweeter. A DSP-based crossover filter has a number of advantages over other filters. You connect the amplifier directly to the speaker unit, giving you more control over the signal going to the units. There are therefore no passive filter components such as resistors, coils and capacitors in the signal path, with their inherent non-linearity. In addition, you can apply certain filters in the digital domain, which are difficult or impossible in analogy. This also gives the designer much greater control over how the loudspeaker units, and thus the system as a whole, behaves. The midtone and tweeter are acoustically aligned on the baffle, but we use the DSP to set the mid-high and the low 'on time'. You can not do that in an analogoue way, but with a DSP it is child's play. Finally, we use the DSP to eliminate the phase distortion that occurs as a result of the exchange filter. This results in perfect behaviour in the time domain.

However, we are sparingly using DSP filters. It is also our philosophy that you first have to provide an acoustic design that is correct, and only then apply DSP for the dots on the i. The subwoofers are, for example, are in a closed housing of an optimum volume, for a Q factor of 0.7 and a crossover frequency of around 30 Hertz. So without DSP you already have a very tight and quite deep layer. With the help of the DSP, the layer can practically be extended to whatever level you want. The default setting gives a -3 dB point on 20 hertz. In the layer, the loudspeaker and the room behave more or less as one system, so in some rooms you want more sublayer and in others less. That is why it is important to optimise the adjustment of the layer on location by means of the app.
A well-implemented digital filter adds nothing and takes nothing away. It only ensures the desired filtering. This means that the end result corresponds more to the original signal than to an analogue filter, let alone a passive filter. Good technology is inaudible technology, and that is what we strive for with our loudspeakers: a system that adds nothing and leaves nothing away. Only the music remains.

This article is an edited and expanded version of a text that previously appeared on Alpha Audio.